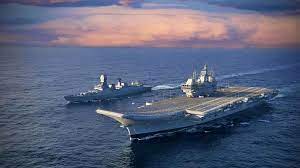 Following its commissioning, the IAC-1 will be christened INS Vikrant to honour India’s first aircraft carrier of the same name, which played an important part in the 1971 war.

With Prime Minister Narendra Modi preparing to commission the new INS Vikrant, the country’s first indigenously built aircraft carrier, on September 2, an old favourite of India will be brought back to life this week.

On September 2, the Cochin Shipyard Limited in Kochi will commission the vessel. The launching of the INS Vikrant will be a significant step forward in the Narendra Modi government’s push for self-sufficiency, particularly in crucial industries.

According to the Indian Navy, the commissioning will be a “historical milestone in realising the Nation’s commitment to AatmaNirbharta.”

Made in India INS Vikrant

The Indian Aircraft Carrier (IAC-1) is the first aircraft carrier conceived and built in India. Vikrant was designed by the Indian Navy’s in-house Warship Design Bureau (WDB) and built at the Cochin Shipyard, a public sector shipyard, with state-of-the-art automation systems.

Why Is The Vikrant Commissioning Vital For India?

Aircraft carriers are an essential feature of any blue water navy and one of the country’s most valuable marine assets. Such warships enable the Navy to conduct dominance operations in other countries or locations far from its home base.

With the assigning of Vikrant, India will have two functioning aircraft carriers, which would make stronger the country’s naval safety.

The commission is also significant internationally because it adds India’s name to a relatively tiny club of nations capable of producing such exceptional aircraft, allowing India to project its influence abroad.

While the INS Vikrant will be the country’s first indigenously built warship, India has been utilising warships since 1961. None of them were made in India, including the former INS Vikrant.

The British built INS Vikrant and INS Viraat, which were introduced into the navy in 1961 and 1987, respectively, and were originally known as ‘HMS Hercules’ and ‘HMS Hermes,’ according to The Indian Express.

Later aircraft carriers, such as the INS Vikramaditya, which was commissioned by the Navy in 2013, were built in Soviet-Russia and were previously known as Admiral Gorshkov.

While the INS Vikrant will be commissioned on September 2, it will not be a deployable platform that can be utilised in battle for at least the next 15 months. During this time, Vikrant will act like a massive floating air-deck devoid of ‘teeth.’

BigBasket is going to raise $200 million up to $3.5 billion in valuation
SEC fines Oracle $23 million for bribery charges in India, UAE and Turkey
According to a report: India's telcos are set to spend $19.5 billion on 5G infrastructure by 2025