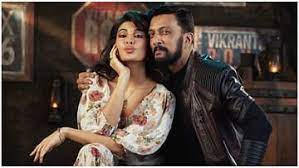 The action adventure fantasy film Vikrant Rona, directed by Anup Bhandari, will be released on July 28, 2022. Kichcha Sudeep, Jacqueline Fernandez, Nirup Bhandari, and Neetha Ashok play the title characters in the film. On July 28, 2022, the Vikrant Rona movie had a worldwide theatrical release.

The Story of the Film

A retro play called Vikrant Rona is set in the historic Karnataka village of Komarattu. When a police officer inexplicably dies, Inspector Vikrant Rona (Sudeep) is called in to address the situation. After looking into it, he discovers that sixteen other young children have also been murdered, and that these killings are related to his life.

While travelling through a wooded forest, a young girl and her mother are startled by a frightful noise and a shadow darting across the road. Anyone with common sense would drive on, roll the windows up, and wait it out.

However, in this movie, while the character is unaware, something terrible is about to happen. Of course, the mother immediately exits the vehicle, looks ahead and notices something, turns around, and everything goes dark.

What is the link between those two? Who is the assassin? And how was it resolved by Vikrant Rona? The rest of the plot is made up of that. Go and watch the movie to witness the action and adventure.

The Strong Points of the Movie

The film’s incredible production values are among its greatest strengths. The scene and the environment that have been built seem pretty absorbing and give the viewer a feeling of tension. The core of the movie is the camerawork that highlights the forest scenes and the striking BGM.

Kichcha Sudeep is a further valuable asset due to his outstanding performance. He did a great job of carrying the movie on his shoulders since he has a lot of solo parts. He appeared quite fit and performed admirably during the climax.

In the Rakamma song, Jacqueline Fernandez makes a guest appearance and is adorable. The first fifteen minutes of the film are excellent at setting up the plot. Finally, the execution of the finale and the manner in which the murderer is identified is quite good.

In order to tell a suspenseful story, the director constructed a new world. The visual effects are also quite important and look fantastic. The supporting performers performed admirably in their assigned roles as well. Nirup Bhandari gets a good, substantial role.

The Bottom Line about Vikrant Rona

Vikrant Rona is a suspense thriller overall, with a fantastic backdrop, a strong performance from Sudeep, and outstanding production qualities. Although the world that has been built draws you, the excessive length and convoluted narrative divert viewers’ attention. If you don’t mind the flaws mentioned above, you can watch this movie this weekend.

When we talk about the individual performances, Kichcha Sudeep brings the mass impact to the film, whereas Jacqueline Fernandez looks sizzling in the item song. However, Jacqueline’s fans are quite disappointed because she has a limited role.

Despite this, the story of Vikrant Rona doesn’t make any sense. Vikrant Rona upsets sometimes despite mixing a diversity of humorous, scary, and thrilling aspects. Not only have that, but the movie’s making also looked like chaotic in a few situations.

Vikrant Rona seems to lose control of the narrative, particularly after half time, as the story goes out of control. The public feels confused and nervous as a result of the unclear situation.