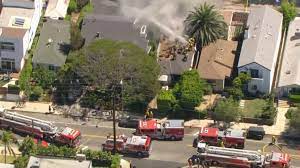 American actress Anne Heche is highly injured and burned and hospitalized in a critical condition after a fiery car crash. Her last appearance is in the film named 13 Minutes in the year 2021. On Friday, August 5, in Los Angeles, actress Anne Heche apparently involved a car accident and was taken directly to the hospital.

Anne struck a house with her car and got multiple burns in fire car crash. Her health is reportedly serious after sustaining major burns. The actress aged 53 was apparently driving a blue Mini Cooper and loss the control. Before rushing it into a Los Angeles home, she reportedly ploughed her car into an apartment complex’s garage.

Anne Heche Rushed To Hospital In A Critical Condition

Anne Heche was travelling at a high speed when she deviated off the road and collided with a residence, stated by the Los Angeles Police Public Information Officer Jeff Lee.

According to the Los Angeles Fire Department, the collision set the car on fire and resulted in the burn injuries that she had. Anne Heche was in critical condition when LAFD paramedics took her to a nearby hospital. Firefighters needed more than an hour to completely put out the blaze.

She is being from the television programme named Another World and made famous. She portrayed the twin’s role as Vicky Hudson and Marley Love in the television show, and her performance was recognised with a Daytime Emmy Award. She has also appeared in movies including Wag the Dog, Six Days Seven Nights, and Donnie Brasco.

Actress, director, and writer Anne Celeste Heche is American. She first gained notoriety for her roles as Vicky Hudson and Marley Love in the soap opera Another World (1987–1991); for these roles, she was honoured with two Soap Opera Digest Awards and a Daytime Emmy.

She gained fame in the late 1990s because to appearances in the drama-crime film Return to Paradise (1998), the action comedy picture Six Days, Seven Nights (1998), the horror film I Know What You Did Last Summer in the year 1997, the disaster movie Volcano in 1997, and the crime drama Donnie Brasco in the next year.

Did Anne Heche Experience An Accident And How?

According to accounts, the actress Anne Heche was seriously hurt in a catastrophic car accident into a Mar Vista home on Friday. The 1700 block of South Walgrove Avenue was the scene of the collision, which was reported just before 11 a.m., according to Brian Humphrey of the Los Angeles Fire Department.

How long did Anne Heche and Ellen DeGeneres date?

She felt like patient zero in cancel culture according to Heche, who dated DeGeneres from 1997 to 2000. This was not a committed relationship. I was given the opportunity to stand up for what I believe in and have done since I was a young child at this particular point in my life “Heche remembered.

What Is The Net Worth Of Ellen Degeneres?

The 64-year-entire old’s Ellen DeGeneres net worth is $500 million, according to Celebrity Net Worth. The Ellen DeGeneres Show, which DeGeneres launched in September 2003, ran as one of the most popular talk shows in the US until 2021.

The Yankees Trade Slugger Gallo to The Dodgers
Stocks Rise After CPI Report Shows Inflation Declined To 8.5% In July
Bill Russell, A Basketball Champ With A Record 11 NBA Championships, Passes Away At Age 88