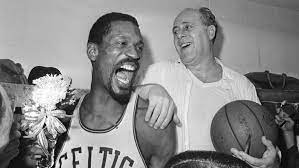 Bill Russell is a legendary basketball player, passed away at the age of 88. Russell was the player with the most NBA championships winner in history. The Boston Celtics had all eleven NBA winning trophies.

He changed the game by continuous shot blocking an important part of defense as a five-time league MVP. He was the black athlete who opposed racial injustice when it was less prevalent than it is now.

Early Age Fight For What He Deserve

In order to achieve the goal, you have to keep in mind a parent’s instruction to become an exceptional athlete. When Bill Russell was nine years old, he was one day in front of his Oakland, California, projects apartment then five youngsters who sprinted towards him slapped him in the face.

When he and his mother went in search of the youngster gang, little Bill expected his mother would punish them. Instead, Katie Russell his mother urged him to take each enemy on individually instead of all. He won two and lost three as Russell revealed the story for his Civil Rights History Project that his mother’s advice to her tearful son had huge impact on his life.

But he never falls on the basketball court, where he eventually found success but ultimately revolutionized the sport and become example for all minorities.

How He Takes The Game To The Higher Level

By the year 1963, Russell was a shot-blocking monster in this NBA Finals game, which marked a fundamental shift in the sport. His University of San Francisco coach in the 1950s held that opinion but, Russell did not, though.

His attempt to improve in basketball appeared very fair given that he was also a high jumper in track and field. In the 2013 interview, Russell recalled, “My first varsity game at USF played at the University of Cal Berkeley. Their centre was an American preseason all-star which I blocked his first five shots.

Nobody else in the building had had witnessed anything similar in the past. They decided to talk about what I was doing during the timeout. My coach tells me in our team huddle that you can’t play with such defensive approach. On the side lines my coach demonstrated to me how I should play defence. I do it again, and the guy makes three consecutive layups to score.

I responded by saying that this was ridiculous. I then resumed playing in my familiar manner that I am born for. Later I realize, what I was doing was moving a horizontal game into the vertical realm, and the outcomes were strong.

In 1955 and 1956, Russell led San Francisco to NCAA championships and he also guided the United States to an Olympic gold medal in 1956. The beginnings of an NBA run in history followed shortly after.

Love And Hate In Boston For Russell

The Celtics won 11 championship trophies held between 1957 and 1969, he led record eight straight wins. There were several excellent players, including Bob Cousy, Tom Heinsohn, Sam Jones, and K.C. Jones but no one match Russell.

He was the link to all 11 championships and a strong competitor who always finds ill before games. Despite his success, he had a tense connection with the city where he played the most games. Russell had faith in certain Boston’s white supporters who would applaud victories then afterwards criticising the club for having too many Black players in the team.

Former teammate Heinsohn recalled about Boston suburb where Russell lived, hosted a meal in Russell’s honour in a Boston Globe documentary. Heinsohn stated that the recipient was so moved by the distinction conferred upon him that he broke down, began to cry, and he said that he wanted he could live in Reading for his remaining life.

But very soon after that, someone broke into Russell’s home, damaged his memorabilia, urinated in his bed, and spat on the walls. He grew distant from people outside the Celtics locker room. He earned a rep for being snarky. To screen out the “good” fans, he wouldn’t sign autographs.

Stephen Beslic noted in Basketball Network in 2020, Russell was the sort that had suspicions about people’s motives and didn’t want someone manipulating him for his popularity. That’s why he proposed a straightforward solution: in exchange for 15 minutes of coffee time with one of the greatest players in game history, you won’t get anything signed by him.

His Indefinite Love For His Team

Russell adored the Celtics and the forward-thinking white executives Walter Brown and famous head coach Red Auerbach. The Celtics became the first NBA club to feature an all-Black starting line up during the dynasty era.

Russell became the first Black head coach in the NBA when Auerbach appointed him to fill his shoes after he retired. Even though it was historic, Russell claimed not to care. He merely thought he was the ideal candidate for the position.

Although, according to the Mr. Russell’s House documentary on NBA-TV from 2013, a reporter had doubts about the first Black coach in a major league sport, can you do the duties without bias on account of race?

Russell Beyond The Court

Russell actively participated in the civil rights movement that coincided with the Celtics dynasty in the 1960s. He watched the famous “I Have a Dream” speech by Martin Luther King Jr. from the front row at the Lincoln Memorial in Washington, D.C.

He and his Black teammates boycotted a Kentucky game because a restaurant turned them away. He sided with Muhammad Ali, a boxer who declined to serve in the military during the Vietnam War, along with other well-known Black athletes.

Go Up For Glory Is A Book By Russell

Damian Thomas, curator, claimed that it is truly transformed how athletes wrote about themselves and society of the Smithsonian Museum of African American History and Culture’s sports display. He claims that the book was a component of the show and transformative autobiography.

Thomas noted that sportsmen were starting to express thoughts on racial issues, politics, and other topics in addition to just sports. Russell never stopped advocating for civil rights and combating racism. Russell stated that George Floyd’s death by Minneapolis police that year was “yet another life snatched by a country devastated by prejudice and intolerance.

What can we do about this kind of racism, Russell composed in the book? Racism cannot simply be shaking out of society’s fabric like dust from a rug, it rises briefly into the air before falling back to its original location and thickening over time.

Reforming the police is a start, but it is insufficient. Broken systems need to be taken down so we can rebuild. We must use a variety of groups and strategies to make our voices loud as America needs a new rug, and we demand it.

A Laugh For Ages In Boston City

Russell lived a long life that was both intense and hectic at different times. Russell and Wilt Chamberlain, an old friend and ardent opponent, had a falling out because Russell disliked the word rival to characterise their on-court relationship.

Did Bill Russell won 11 championships in his carrier?

Bill Russell holds the world record for winning the most 11 NBA championships titles in his 13 years stretched carrier from Boston Celtics Center.

How many of games did Bill Russell lost in his entire carrier?

Bill Russell a total of 25 games including NBA titles in his ruthless career.

The absolute legend, Michael Jordan is the lonely player who never lost any NBA finals and be the greatest player of all time.

Fresh Premier League Campaign, And The Inclusion Of Impactful Debuts Like Saliba, Jesus, And Zinchen...
Anne Heche Receives Assistance From Hollywood After A Car Accident Because She Is Being In Real Cris...
Trump Claims That FBI Officials Searched His Florida Home In Mar-A-Lago