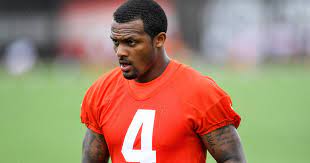 In response to allegations of sexual misbehaviour, the league claimed Watson broke its personal conduct guideline. He was told that only club-directed sessions and club-approved massage therapists were allowed for him to receive massages.

Deshaun Watson, the quarterback for the Cleveland Browns, was given a six-game suspension by a league official on Monday for egregious acts of sexualized contact with massage therapists.

The retired federal judge Sue L. Robinson, who presided over the disciplinary hearing and made the decision, has given the NFL three days to file an appeal. Watson sought out multiple massage therapists via social media, according to Robinson, who determined that there is sufficient circumstantial evidence to support the NFL’s argument.

The judge further stated that the quarterback understood such sexualized contact was prohibited. However, NFL’s decision to bench Watson for the whole 2022 season. Robinson continue playing if this suggested consequence as described by Mr. Watson and the NFLPA is unusual because his conduct is exceptional.

What Are The Allegations For Six-Game Suspension

The judge noted that he was a first-time offender and had a great reputation in his community prior to these occurrences. But, in real he had already been suspended throughout 2021 as these allegations hung over him.

That’s why Mr. Watson is hereby suspended for six regular-season games without pay. Mr. Watson’s pattern of conduct is more heinous than any before examined by the NFL,” the NFL said of the punishment, “even though this is the most significant punishment ever given on an NFL player for allegations of non-violent sexual conduct.”

Additionally, Watson had to stick to Club-directed sessions and Club-approved massage therapists for his massages. The NFL announced on Monday that it is considering its options in light of the decision. On Monday, it was impossible to immediately reach Watson’s attorney for comment.

On Monday, a representative of the National Football League Players Association (NFLPA) reaffirmed the union’s position from the previous day that Watson would follow Robinson’s order.

By stating that “Watson and the union will not be appealing the verdict,” NFLPA spokesman Brandon Parker asked NFL Commissioner Roger Goodell not to challenge Robinson.

Here Are The Official Judgement On The Disciplinary Action

Watson was on the practise field when he was enthusiastically greeted by supporters and surrounded by children who wanted his autograph. After practise, coach Kevin Stefanski spoke to the media for almost 10 minutes, with Watson queries taking up only roughly 30 seconds of that time.

Stefanski wants to honour Judge Robinson because this NFL disciplinary process was collectively bargained. Even though Watson would probably miss at least the first portion of the season, the coach insisted that he still intends to use Watson in preseason games.

Stefanski declared that the quarterback had his trust. Deshaun will make wise decisions both on and off the field, I’m confident in that, he stated. Robinson criticised Watson in her decision for his “lack of expressing sorrow.” Dee and Jimmy Haslam, the owners of the Browns, argued the opposite in a joint statement.

Deshaun will keep working to prove who he is both on and off the field, and we will continue to support him. Deshaun Watson feels sorry that this situation has caused great grief to many. The six-game ban is inadequate, according to the National Organization for Women, who also dubbed it “unacceptable, demeaning, and dangerous but not surprising.”

Who Wants To Lift His Criminal Charges

Everyone is conscious that the NFL has a problem when anywhere happens violence against women. Mr. Watson not to be allowed to get profit from his appalling actions, and the NFL must transform its culture of tolerance for such kinds of sexual misconduct into one that values women and holds culprits of abuse responsible.

In March, Watson agreed to a five-year deal with the Browns worth $230 million guaranteed, despite claims of sexual misconduct during massage sessions attended by over 20 women. He didn’t play for the Houston Texans at all last season as his legal issues developed and the team tried to trade him.

As a result, he has already missed a significant period of time on the field. The NFL is one of the few, if not the only, American businesses that employees constantly scrutinise for how it handles cases of domestic abuse.

After disturbing surveillance footage surfaced in 2014 showing Baltimore Ravens running back Ray Rice knocking out his future wife and dragging her body down an elevator, he was initially punished for just two games.

How Deshaun Watson Explanation On The Charges

This case got off to a good start because one brave woman dared to speak up and be heard. Her bravery served as an example to many others who had gone through similar circumstances, according to a statement from plaintiffs’ lawyer Tony Buzbee. Without that one bold voice, this entire saga would not have taken place. One individual can influence events.

Watson’s accusers allege that after hiring them as personal trainers and massage therapists, he inappropriately touched them. In March, two grand juries in Texas decided not to charge Watson. In both cases, the district attorneys gave no further explanation as to why the grand juries did not return an indictment.

Watson has opposed all the misconduct as per the statement from June, his lawyer, Rusty Hardin, said: “Deshaun Watson did nothing wrong. Deshaun committed no crimes, as established by two grand juries.

Deshaun has always admitted engaging in consenting sexual behaviour after treatments with three of the plaintiff massage providers. Deshaun has also consistently declared under oath that none of his victims were coerced into having sexual relations with him.

Watson, a 2016 graduate of Clemson University and a native of Gainesville, Georgia, has played in the NFL since that year. He is 26 years old. With the Texans in 2020, he had his best season, topping the league in passing yards (4,823 yards) and touchdowns (33).

Watson would be available to play in the seventh game of the upcoming Browns season on October 23 when Cleveland is scheduled to travel to the Baltimore Ravens after serving a six-game suspension.

In Watson’s absence, the Browns, who acquired the troubled quarterback in a trade in March, might be forced to start Jacoby Brissett, a journeyman quarterback.

Why Deshaun Watson Get Only 6 Games Suspension?

The Cleveland Browns Quarterback was found guilty with more than two dozen women of sexual misconduct during massage. Because of all these violations, he was suspended for six upcoming games without any pay.

Does Deshaun Watson Get Salary During Six Games Of Suspension?

Watson’s actual signing bonus of $8,993,000 for the upcoming season is not impacted by the 6 games suspension. including all the bonus deductions, his salary over the next four seasons will be more than $46 million per year.

How Much Money Did Watson Lose Due To Suspension?

CBD in competitive sports – the most important information for athletes
Details About a Folding Bike
Ravindra Jadeja: 'Hey, Your Ex-Coach Is Sitting Here-When The Legendary Player Spoke To Ravindra Jad...