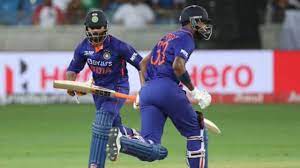 Hardik Pandya’s all-round performance led India to an exciting five-wicket win against arch-rival Pakistan in an Asia Cup 2022 match on Sunday. Pandya finished his excellent bowling spell with stats of 3/25 in his full quota of 4 overs, that helps India limiting Pakistan to 147 in 19.5 overs, and then scored 33 off 17 balls, and hit the winning six in the final over delivered by left-arm spinner Pakistani bowler Mohammed Nawaz.

Another Indian all-rounder Ravindra Jadeja provided 35 runs from 29 balls to consolidate the partnership with Pandya. When India bowled first, Indian seamer Bhuvneshwar Kumar had the best stats of 4 for 26 in four overs. Former India captain and Indian third down player Virat Kohli scored 35 off 34 balls in the crucial run chase. With an excellent stat of 2/27, Pakistan’s top bowler was Naseem Shah also done damage against India.

Let’s Have A Look At The Full Match Highlight

IND 141/4 after 19 overs – 7 runs required off 6 balls Rishabh Pant gives over the gloves to Ravindra Jadeja, although this should be more of a signal from the dugout to kick on. Hardik Pandya hits a home run, and India has a new boundary. Hardik connects to the extra cover boundary, giving India the advantage.

IND 107/4 after 16 overs: India requires 41 runs in 24 balls | Jadeja and Hardik are in complete command of the game, but the needed run rate is 10.25. Pakistan is still in the game, but India has the muscle to push through and win the Asia Cup 2022. They’ll need a good over so the white ball can soar around the Dubai park.

How Match Turns To India’s Fortune

IND 97/4 after 15 overs: Naseem Shah takes his second wicket, and Suryakumar Yadav is out as the middle-order batsman attempted to heave across the wicket rather than play down the ground. Clattered off-stump! India is in complete control of the game, and out comes the man who can’t go wrong this season. Runs with the bat, wickets with the ball Hardik Pandya assumes command, assisted by Ravindra Jadeja.

IND 83/3 after 13 overs: Suryakumar Yadav and Ravindra Jadeja have formed a partnership and are carrying the game to the limit. Shadab Khan and Shahnawaz Dahani do not give anything away. India is still in front, with 64 deliveries needed in 40 days. Although players like Hardik Pandya and Dinesh Karthik are highly regarded, nothing can be taken for granted.

How Batting Combinations Works For India

IND 62/3 after 10 overs: Virat Kohli showed signs of returning to form, but Mohammad Nawaz caught the big fish to keep Pakistan in the game. The Indian management made an unexpected adjustment by pushing Ravindra Jadeja up the order, and the all-rounder demonstrated his intensity by smashing Mohammad Nawaz with a big six into the stands. India is in command. 86 in 60 balls is required.

IND 38/1 at the end of 6 overs: Kohli has come out firing on all cylinders. The former India skipper is off to a fast start, batting on 30 off 26 balls with three boundaries and a maximum. Rohit, on the other hand, has devoured 13 deliveries and scored four runs. The point is, Virat is batting at a considerable strike rate 115. 38.. That sums up the PowerPlay.

IND 23/1 after 4 overs: Virat Kohli is on a mission, and he and Rohit Sharma have helped India get off to a good start despite the loss of KL Rahul. Haris Rauf hits a short ball, and Kohli accepts the challenge, goes for the pull, and scores a maximum. He’s in a good mood today.

IND 3/1 after one over: What a great start! KL departs early in a 148-run chase, giving Virat Kohli a life. Naseem Shah is bowling at his pace, and Fakhar Zaman will be under pressure to dismiss Kohli. This match isn’t going to end anytime soon. Brutal and belligerent.

How Was Indian Bowlers Throughout The Innings

PAK 147 towards the end of the innings All in: Bhuvneshwar Kumar’s four-wicket haul (4/26) and Hardik Pandya’s outstanding run of bowling (4-0-25-3) have given India the upper hand in this high-stakes match. Arshdeep Singh contributed, with the left-arm pacer dismissing Mohammad Nawaz and Shahnawaz Dahani. Over to India’s openers, although nothing can be predicted till the last ball is bowled. See you later for the chase.

PAK 124/7 after 18 overs: With the wickets of Mohammad Rizwan, Iftikar Ahmed, and Khushdil Shah, Hardik Pandya has destroyed the core of Pakistan’s batting line-up. However, India must exercise caution since it cannot afford to lose runs at the death.

PAK Hardik Pandya strikes with a three-wicket haul to put India on top at 103/5 after 15 overs. The persistence in digging the ball short and forcing the batsmen to pull has paid off handsomely. There is pace, bounce, and carry, and Hardik Pandya has made a magnificent entrance into the Asia Cup. Short balls have done the trick. India’s new strategy, the Short ball theory, has taken Pakistan off guard.

How Indian Fast And Spin Bowlers Done The Task

PAK 76/2 after 11 overs: Mohammad Rizwan and Iftikhar Ahmed have dropped anchor, and India is hoping for another breakthrough. Chahal and Jadeja both bowled two overs and attempted to buy some turn but were unsuccessful.

PAK 59/2 after 8 overs: Spin is being added into the attack, and Yuzvendra Chahal’s first over has yielded eight runs. Hardik Pandya has bowled well, changing his pace, striking the correct lengths, and mixing his deliveries. There is some extra bounce, which is aided by some turn. Iftikhar Ahmed and Mohammad Rizwan have a task ahead of them.

After 6 overs, Pakistan is 43/2: Avesh Khan hits, and it’s a significant wicket! Fahkar Zaman walks after nicking Avesh behind, and neither the bowler nor the wicket-keeper appealed. The breakthrough came at an ideal time for India, as Rizwan and Zaman were rebuilding their innings. The Indian bowlers performed admirably in the PowerPlay.

Let’s Finish The Game For India

WICKET – Bhuvneshwar Kumar strikes! PAK 19/1 after 3 overs: WICKET – Bhuvneshwar Kumar strikes! What a strike for Pakistan, and what a wicket for India. Bhuvi has removed Babar Azam right inside the PowerPlay, and the Pakistan skipper has fell for a pull. Bhuvi digs in short, Babar attempts the pull but only gets a top-edge, and Arshdeep Singh makes no mistake at short fine leg.

Right now… The National Anthems have been completed, and the Pakistan openers have arrived. Bhuvneshwar Kumar will begin proceedings with the new ball, followed by Babar Azam and Mohammad Rizwan. Let’s get started!

In Cricket, How Many Times Has India Defeated Pakistan?

India and Pakistan have played each other 200 times in international cricket, the most recent of which being in the T20 World Cup in 2021 at the same site. Pakistan leads the head-to-head record with 87 victories, while India has won 71 and drawn 38 games.

Who Won The Match Between India And Pakistan?

In Dubai, India defeated Pakistan by five wickets. Hardik Pandaya rounds out the scoring with a six. As the match neared its last over, Naseem Shah bowled Ravindra Jadeja. India requires 6 runs in 4 balls.

Who Won The Most T20 Matches Between India And Pakistan?

India and Pakistan have played ten T20 matches against each other. Out of these ten games, India has won eight of them, while Pakistan has won two.

Where Can I Watch The Asia Cup In Pakistan?