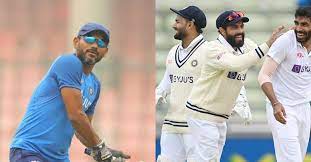 A 5 match T20 series is going on between India and West Indies. Team India is up 1-0 after winning the opening game. Team India hopes to extend its winning streak in the second game, which is scheduled on Monday, August 1. In the meantime, a humorous statement made by veteran cricketer K. Srikanth during the first T20 match is doing the rounds on social media.

A video of the first match is going viral, in which Krishnamachari Srikanth is having fun with Ravindra Jadeja while doing commentary. Ravindra Jadeja had all-round performance in the first T20 match and contributed to the team’s victory.

Team India is currently playing a five-match Goldmedal T20I series against West Indies and is leading 1-0 after winning the first match comprehensively. The second match is to be played on Monday, August 1, and Team India would like to carry forward the winning streak. Meanwhile, a video of the first T20 match is going viral, in which former cricketer K. Srikanth is making a funny statement with co-commentator Ravi Shastri.

How Krishnamachari Srikkanth Praise Jadega When He Come To Bat

When Ravindra Jadeja was batting, Krishnamachari Srikkanth said come on Jadeja, show the josh. Your ex-coach is sitting here. People are liking this funny video of Shrikant. The scene starts when Team India’s batting was going on and Ravindra Jadeja on the crease, then Krishnamachari. Srikkanth and former Indian team coach Ravi Shastri were doing commentary.

At the same time Krishnamachari Srikanth said, ‘What are you thinking? Will India kill 200 or not? Jaddu, come on. Your ex-coach is here in the commentary box.’Srikanth also heaped praise on Ravindra Jadeja and said how much he has improved during Ravi Shastri’s coaching tenure, Ravindra Jadeja’s has improved his game a lot and he is continuously showing the confidence.

Ravindra Jadeja also showed his brilliant batting and bowling skills in Australia. In the first T20 game, Team India had scored 190 and West Indies were bundled out for 122 and won by a huge margin of 68 runs. Team India is currently preparing for the T20 World Cup and different players are being tested in the squad to estimate his bench strength.

Ravindra Jadeja, also named vice-captain for the ODI series, missed the game due to nigle but he made a strong comeback in the T20 series to prove his importance. In the first T20, Ravindra Jadeja scored 16 runs in 13 balls, besides taking a wicket and couple of excellent saves in the field.

What To Expect From The Goldmedal T20 Series

Obed McCoy, a left-arm fast bowler for the West Indies, destroyed India for 138 on Tuesday in second T20, helping the hosts win by five wickets and tie the 5 match series. It was one of the most significant bowling performances in the history of T20 International cricket. The host team control their nerves in the final over to tie the five-match series at 1-1. Before that the 25-year-old fast had the best-ever stats by a West Indies bowler in the shortest format of the cricket game. Obed McCoy finished with 6/17 after a sensational over quota that included both accurate cutters and other pace variations.

Opener Brandon King led West Indies with 68 runs off just 52 deliveries to spur a victorious successful chase for the country. Devon Thomas also played a crucial unbeaten 31 off 19 balls, which included a six and a four. The tail end also showed his maturity and talent to lead West Indies to achieve victory in the final over.

West Indies wicketkeeper batsman Thomas slashed the next ball from seamer Avesh Khan to the backward point boundary following a six on free-hit and achieve the 10 runs needed from the final over for West Indies.

Mr. Ravindra Jadeja, a veteran all-arounder of Indian Team, will miss the first two One-Day Internationals against the West Indies due to a right knee ailment pain. The medical staff of the BCCI is keeping track of his conditions, and a decision regarding his participation in the third ODI match.

Who Awarded Ravindra Jadeja The Title Of Sir?

Have you ever considered the meaning of Sir in relation to a cricketer, Ravindra Jadeja? Prior to the Indian Premier League 2022 season, former Indian skipper and CSK Captain MS Dhoni gave the title because of his exceptional cricketing skills.

Undoubtedly, Ravindra Jadega is one of the best fielders in the cricketing world from a decade. He is a regular Indian cricket player and can bat, ball, and field in any situation and condition. His fitness and athletic physique helps him to cross the 22 yard in a flash.