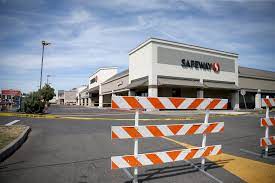 A 20-year-old gunman killed an elderly shopper at a Bend Safeway on Sunday evening and was still shooting up the store when an employee confronted him, potentially preventing a far worse attack, police said Monday.

Bend Police announced the shooter was 20-year-old Ethan Blair Miller during a news conference. Glenn Edward Bennett, 84, was shot near the front of the Safeway, as was Donald Ray Surrett Jr., the 66-year-old employee who attacked Miller.

“Mr. Surrett engaged the gunman, sought to disarm him, and very possibly may have saved other deaths,” said Bend Police Department spokesman Sheila Miller, who is not related to the shooter. “During this awful occurrence, Mr. Surrett acted heroically.”

How Was Surrett And Bennett Were Injured In The Incident?

Debora Jean Surrett, the ex-wife of the Safeway employee slain in the incident, told The Associated Press over the phone that Surrett was a combat engineer in the Army for 20 years.

He was not deployed to active war zones, although they were stationed in Germany three times and resided on military bases across the United States during their 20-year marriage from 1975 to 1995.

They are specially trained to be the first one to go into battle and the last to return after the job done,” she told the Associated Press. In addition to Surrett and Bennett, two other people were critically injured in the incident.

Officers discovered Ethan Miller dead from a self-inflicted gunshot wound within the store just four minutes after receiving the first call about the incident at 7:04 p.m. Police arrived on the scene while shots were being fired but did not use their firearms, according to Sheila Miller.

Near the killer’s body, officers discovered a semi-automatic rifle and a shotgun. He was alleged to have acted alone. Police declined to comment on a possible motivation on Monday, and could not confirm whether Ethan Miller had previously worked at the Safeway, as some neighbours have said.

Police Searched Miller’s Apartment And The Safeway For Bombs

Bend police concentrated their efforts Monday on the Fox Hollow apartments, a cluster of light blue buildings behind the retail centre where Miller lived and, according to authorities, began his shooting spree.

A woman who lives next door to a unit being searched by police told a reporter that she was evacuated about 11 p.m. Sunday due to a suspected bomb danger in the building. She stayed in a hotel for the night.

“They had to wait for a bomb squad from Portland or Salem to deal with it,” claimed the woman, who did not want to be identified.

Police said they searched Miller’s apartment and the Safeway for bombs. Three Molotov cocktails and a sawed-off shotgun were discovered in his vehicle, and ammunition and “digital devices” were recovered from his apartment. A bullet hole developed on the side of a Ford pickup outside the apartment.

Who Identified The Shooter As Miller?

Miller had recently moved into the residence, according to neighbours. Several neighbours reported they heard the shooting begin inside the complex before it faded as the shooter moved toward the Forum Shopping Center.

Ender Crafard attended Mountain View High School one grade below Miller and ended up residing in a nearby apartment. Miller, he added, was athletic and quiet, and he was open about his love of guns.

“You could tell he was a connoisseur,” Crafard observed. “I just assumed he came from a gun family… I would not have chosen him to do something like that. “He didn’t give off that vibe.”

Other former students who talked with OPB described Miller as an aggressive student who routinely attempted to initiate confrontations with peers. Lori Bender, who lives across the street from the apartment, said she heard bullets just outside her door.

A neighbour identified the shooter as Miller, a former student of Bend’s Mountainview High School. Two additional persons who went to high school with Miller told OPB that he was the shooter.

In the months preceding up to the massacre, an internet account in Miller’s name wrote many writings suggesting suicidal ideation and a desire to harm people. The author of those posts said that he planned to carry out a school shooting at Mountain view High School on September 8, the first day of school.

Mountain view officials told OPB on Monday morning that they were not aware of any threats to the school. Ryan Heming, who lives in a nearby building, reported hearing five rounds fired swiftly.

Looking out the window, he noticed a man dressed entirely in black firing a huge rifle at random. Heming reported seeing the man rushing toward the Costco parking lot, shooting at individuals before making his way to the Safeway.

Who Were Residing In The Miller’s Apartment Complex?

Heming described him as “shooting and laughing.” “He just shot a bunch of bullets… “I was trembling all night.” A few minutes later, he reported seeing two women, one of whom was holding a baby, fleeing the Safeway.

They were in the store when the gunfire started. Heming opened his door and invited them to come inside to wait out the danger. “The baby couldn’t stop wailing,” Heming explained. For the past 15 years, Jennifer and Jason King have resided across the street from Miller’s apartment complex.

They stated they heard three different bursts of gunfire on Sunday night around 7 p.m., each appearing to be further away from their home and toward the Safeway.

“We learned from one of the guys at the Safeway that it was a 20-year-old who used to work there,” Jennifer King added, still horrified by the morning’s events.

The FBI stated that it is providing “intelligence analysis and investigative technology” to the Bend Police Department. In a statement, Oregon Gov. Kate Brown stated the Oregon State Police were also assisting.

In an announcement, Brown said, “Every Oregonian should be able to go to the grocery store without terror of shooter violence.” Bend Republicans replied to the shooting by conveying their “thoughts and prayers” to Bennett and Surrett who dies in the incident. State Senate Republican Leader Tim Knopp praised Surrett and said the state should invest more on mental health care.

“I am devoted to as long as access to mental health resources that will support those with mental health concerns before the entry of the firearm,” Knopp stated. Bend Mayor Pro-Tem Anthony Broadman pleased for accord in the aftermath of the violence at a press conference on Monday.

“We must stand together in such situations. “We’ll do it,” he said. “We know that in the face of the anxiety we saw last night, there are courageous first responders, along with the bold residents, and the people who are ready to stand up for their neighbours in their bad times.” Nothing better captures Bend and Central Oregon than that.”

Who Is Acted Heroically When All This Happening?

“Mr. Surrett involved the gunman, sought to disarm him, and very possibly may have saved other causality,” said Bend Police Department spokesman Sheila Miller, who is not related to the shooter. “During this awful occurrence, Mr. Surrett acted heroically and lower the loss.”

When Was Miller Shifted To The New Residence?

Miller had recently moved into the residence, according to neighbours. Several neighbours reported they heard the shooting begin inside the complex before it faded as the shooter moved toward the Forum Shopping Center.

Stocks Rise After CPI Report Shows Inflation Declined To 8.5% In July
Ukraine war: Ukrainians on the eastern front predict that Putin's annexation will fail
At least 31 people were killed in an attack in Thailand