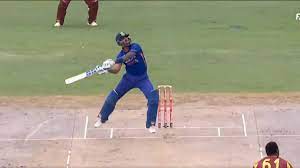 In the fourth Twenty20 International between India and West Indies on Saturday, August 6, Suryakumar Yadav’s opening partnership with captain Rohit Sharma was notable. Surya, who is now the second-best T20 international hitter in the world behind Pakistan’s Babar Azam, hit a six with a helicopter shot (MS Dhoni’s hallmark shot) during the power play.

India was asked to bat first after the West Indies won the toss, and Rohit and Surya gave India a blazing start. In the fourth Twenty20 International of the five-match series against Pakistan, the right-handed pair put up a partnership of 53 runs in just 28 balls to put India in a strong position.

How Suryakumar Yadav Perform As An Opener In The Series

When Suryakumar hit him over square for a six with a helicopter shot, it was even more startling that McCoy had been West Indies’ leading wicket-taker in the series. The Windies’ bowler ultimately allowed 25 runs to India in that over. The opportunity to start the T20I series against the West Indies’ first innings has been seized by Suryakumar Yadav.

The Ball Travelled 80 Metres For An Incredible Six

India was assigned to bat first after the West Indies won the toss. India’s opening batsmen, Rohit Sharma and Yadav, launched their innings aggressively. India scored 50 runs in just 4.3 overs, receiving runs from all directions. After hitting 33 runs off of 16 balls, Rohit Sharma, the Indian Caption was nonetheless out on the very next ball.

Yadav scored 24 runs off of 14 balls, a respectable performance. However, during the six-over power play, the openers were ejected and returned to the pavilion. However, Rishabh Pant then assumed control of the game. Together with Deepak Hooda, he put together a 47-run third-wicket stand until the latter was dismissed for 21 runs off 19 balls.

Lets Come To The Match And The Ongoing Series

Sanju Samson, who remained unbeaten on 30 off 23 balls, made a significant contribution in addition to Pant’s 44 off 31 points. Dinesh Karthik, one of India’s top finishers, struggled to complete his innings as he was out after only six balls. Samson and Axar Patel, who each hit an unbeaten 20 off eight balls, provided the final touch.

Obed McCoy was the main hope for the home team, but he had a difficult day as he let up a staggering 66 runs in just four overs. Despite picking off Pant and Karthik, the damage had already been done because he gave up too many runs in his overs. Alzarri, a pacer finished his 4-overs spell as 2 for 29 runs, was the best bowler for the West Indies. India has already won the series 5 match t-20 series by 3-1 margin, but on Sunday, August 7, the fifth and final T20I will be played between the two teams.

At What Age Did Surya Kumar Yadav Start Play Cricket?

Surya Kumar Yadav learned his exceptional skills while playing in the streets of Mumbai. At the age of 10, his father noticed his liking towards the game and enrolled him in a cricket camp at BARC Colony in Anushakti Nagar. He then went to Elf Vengsarkar Academy and played junior age group cricket in Mumbai.

Which Team Is Surya Kumar Yadav Playing In IPL?

Why Is Suryakumar Yadav Not Playing In 2022 IPL?